Samsung attempts to differentiate the bulk of its HD camcorder line by incorporating SSD–solid-state drive–storage compared to competitors’ habitual hard disks, regular ancient built-in flash, or austerely comes off flash cards. This is a very poor thread to hang a approach on. While SSD theoretically confers a size subsidy over hard disks, Samsung’s core line of four HD camcorders–the HMX-H106, the H105, the H104, and the H100–are on the other hand moderately large, and better than a typical card-based model. The models are like peas in a pod save the built-in storage, which starts at none (SDHC card only) and tops off at 64GB. 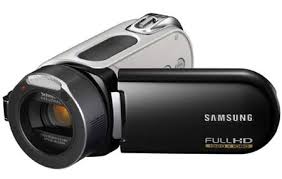 Given that you pay a price premium for the SSD–the differential between the no-memory HMX-H100 and the 16GB H104 is about twice the cost of a Class 6 16GB SDHC card–and the pledge dough gap widens as room increases, the SSD ultimately ends up a marketing attention-grabber. This series assess is based on tests of the H106.

While the camcorder’s point is arresting, the feel is a mixed bag. Physically, it’s quite akin to its progenitor, the HMX10. A tad more compact than nonflash competitors, it looks and feels pretty solid despite its all-plastic construction. All the operational reins–zoom thrash, photo button, power, mode, and confirmation–fall comfortably under your right thumb or forefinger. The top zoom thrash is one of the emaciated, wobbly types that I find uncooperative when trying to keep up a charming, consistent zoom, even if. In a hatch below sit the miniHDMI, the USB, the AV, and the power connectors.

The grip rotates about 150 degrees, and even if you can leave it at any point in the rotation, it locks into only two positions. The first affront rotation drops it by about 5 degrees, increasing the height for better hands. You can take up again the rotation to about 150 degrees, useful when shooting at a low angle. This is a clever, older point that I’ve yet to see worn-out.

Inside the LCD bay are a power thrash, photo flash, sight, full auto Simple Q, and image stabilization buttons. On the LCD bezel sit a secondary zoom thrash, confirmation button and Q(uick) Menu button. The array and the SDHC slot sit on the underside of the camcorder, a poor location if you plot to shoot on a tripod, which completely obstructs the hatch. It also provides a built-in electronic lens cover, a nice figure that has become typical in camcorders in this price range, and the stereo microphones sit on any side of the lens, quick more separation than we typically see in consumer camcorders. 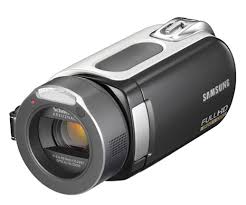 Unfortunately, even if, the touch-cover interface is moderately annoying. I commonly find that touch screens aren’t very comfortable to work with on the 2.7-inch displays run of the mill to this class, and Samsung’s proves to be no exception. I found the logic to be often unresponsive, and require multiple presses to recognize input. That said, the menus are methodical honestly well. Even if, even even if the camcorder offers some blue-collar adjustments, like closespeed and gap, they’re awkwardly obscure in the menu logic. You can’t even pull them up with the Q Menu button; that’s modest for switching storage media (SD or SSD), scene modes,video and photo pledge, white weigh, exposure compensation, and focus (auto, blue-collar, or TouchPoint).

The camcorder minutes 1,920×1,080/60i, as well as 720p and 480p, video using MPEG-4 AVC/H.264 encoding, akin to that used by AVCHD. Even if Samsung doesn’t crash its bit rates, QuickTime reported that most of my test clips encoded at about 17 megabits per following, which is pretty typical for this class; some camcorders can handle up to 24 megabits per following, but if you’re not preparation on control the video you doubtless won’t notice the difference. You can fit about 7.5 minutes of confirmation per gigabyte of storage at peak feature; clips are top bolt from the blue to a most of 1.8GB. 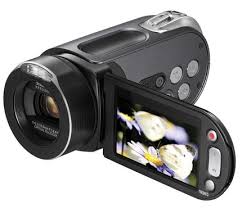 Compared with many of its competitors, primarily the higherpriced ones that go head-to-head with the H106, the performance doesn’t stand up very well. The autofocus primarily seems slow, and has more vex than usual finding and locking on the assess theme. I finished up having to use the TouchPoint focus more often than habitual, and between the occasionally nonresponsive touch cover and the later slow focus–even after being told where to look–I missed numerous shots. The optical preservative works pretty well out to the end of the zoom range, even if.

While the video feature isn’t terrible, it lacks the sharpness and color infiltration we guess from HD models. Edges are noticeably fuzzy, primarily when viewed on a large-cover TV. Even in excellent light there’s some color noise in the video, and low-light video looks audibly noisy and overprocessed. In habitual daylight, the white weigh is overly cool and there’s some clipping in the highlights. Still photos just look smeary and overprocessed.

There’s not much to urge in Samsung’s contemporary HMX series–the H106, the H105, the H104, and the H100–over similarly priced competitors. They don’t stand out in any fastidious aspect, and weak, even if not terrible, performance and video feature may be turnoffs for many public. Previous to committing to one, check out our list of top HD camcorders.

An fascinating point doesn’t offset the so-so video feature and performance, primarily for the higher priced HMX-H106, H105, and H104. If you’re set on this series, even if, the no-memory-included Samsung HMX-H100 is doubtless the best deal of the bunch.