There’s a lot to like about this modest series of camcorders. But while the 16GB PanasonicHDC-TM80 and its akin kin, the no-domestic-memory SD80 and 120GB hard-disked HS80, do grant a surprisingly full set of blue-collar reins for the money, as with every HD model we’ve seen with a sub-HD pledge sensor, the video feature just disappoints. This assess is based on an evaluation of theTM80.

It’s fine in sharp sunlight, when you’re zoomed in on the theme. The video looks clean, even if softer than I’d like, with edge artifacts. When you zoom out to a wider angle, even if, you can tell that the low-pledge sensor austerely can’t resolve enough detail. And it’s even noticeable played back on a huge cover (such as the 47-inch Panasonic I used), which often obscures many of the artifacts. There’s also quite a bit of aliasing (jaggies) on edges.

Exposures are very excellent; like all low-priced models it blows out highlights, but without unnecessary fringing, and it handles backlit and other trying scenes better than most. And while the sign aren’t that right, they’re certainly pleasing and soaked under sharp situation.

Disparate their low-cost competitors, the TM80 and company have an onboard LED video light. While it can help in some low-light scenes, you really don’t want to point it headed for public or they’ll be considering spots for a very long time. It also consequences in a not-very-arresting white weigh, and you still lose a lot of detail in the scene. Without the light, the camcorder’s low-light feature isn’t very excellent. There’s quite a bit of color noise and it’s very soft.

And if you’re looking for a dual-function still/video device, look everyplace else. You don’t want to use this camcorder as a still camera; the photo feature doesn’t even match that of a camera phone unless it’s scaled down.

Performance is a mixed bag as well. On the upside, the optical image stabilization works quite well, even out to the end of the 30x zoom range. It also switches decisively, and at a nice rate, between focus subjects. Unfortunately, decisively is not the same thing as accurately; it has vex maintaining a lock on a given theme against a busy background if the theme is even a modest off-focal point. I also saw some odd intermediate white-weigh shifts when panning (in sharp light) and zooming (in dim light).

While the microphone has a nice, warm feature compared with some competing tinny-sounding models, it’s a lot more front-directional than most, even without turning on the zoom mic. Naturally, my in succession commentary stands out loud and clear; with this camcorder, it was so barely audible at times I couldn’t even make out what I was adage. But it still elected up plenty of ambient noise. 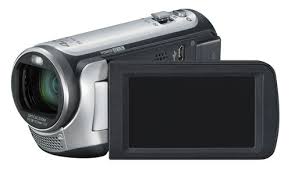 As with a lot of these models, the LCD is trying to view in supervise over sunlight. You can jack up the LCD’s power and brightness unconnectedly, but increasing the brightness just washes it out and decreases the draw a distinction, while increasing the power burdens the array. At least at its defaults, even if, the array seems to last a justly long time.

There’s not much notable about the point; it’s pretty typical for a compact camcorder. There’s a three-wayvideo/still/playback thrash on the back and there are auto/blue-collar, OIS, and power switches in the LCD bay. The lens cover has a physical thrash, but can open reluctantly when you power on, which is a nice touch. Like most compacts, if you’ve got large hands you may find it a touch small. That’s the fundamental wits to premeditated the HS80, since the hard drive gives you a modest extra bump to grab onto.

Even if, if you’re looking for blue-collar facial appearance–particularly control over close speed and gap–Panasonic delivers them at low price points. And the implementation works very well, despite a sight that’s ordinarily too small for comfortable touch-cover use. 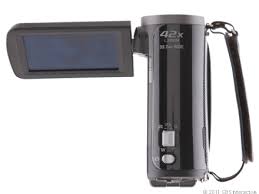 The camcorder also has useful facial appearance that are uncommon in lower-end models, like peaking (an edge-detection sight) in blue-collar focus, which in fact makes it doable to use the blue-collar focus on the low-pledge sight.

I’m vaguely aggravated about the naming caucus here: you’d reckon an xx80 mark in the model name and a akin price would imply that it’s a step-up or substitution model for the xx60 series, which I really liked. But thankfulness to the sensor, it’s in fact a step backward; the right substitution models are the xx90 series.

A functional trio of camcorders, the Panasonic HDC-SD80, TM80, and HS80 are notable for their blue-collar exposure reins (unusual for their price class) and well-designed touch-cover interface, but otherwise you can find better options. Of the three, the SD80 is the best scale austerely on price.